Since its inception in 1899, Atikokan has proven time and time again its resilience and its people make it amazing. Peter Mansbridge once said he’d never seen a town so determined to survive against tremendous odds until he visited Atikokan.

Atikokan > Our Story > Our History

A Long and Rich Tradition 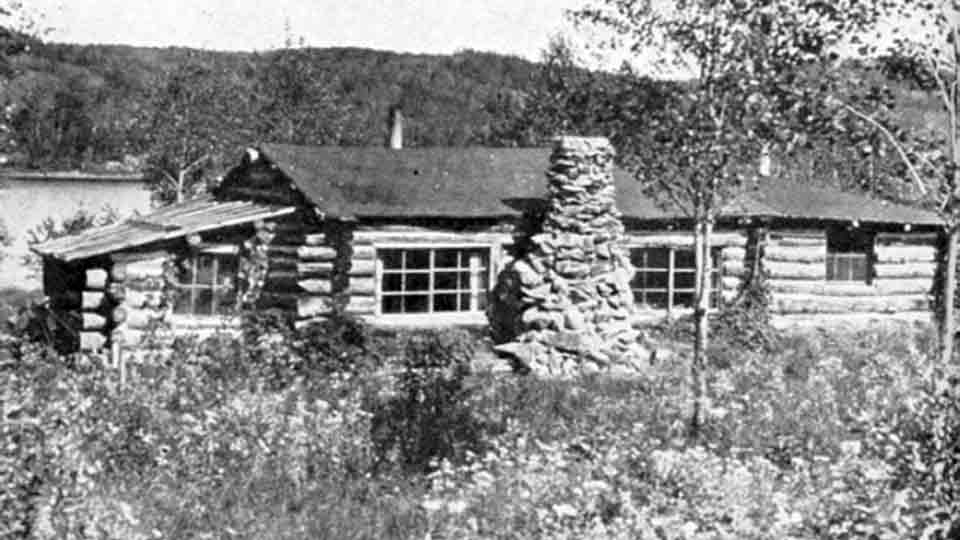 Authors Robert and Kathrene Pinkerton built and lived in this cabin at Wagita Bay 1912 to 1916. Two books by Kathrene describe their experiences living there, “Wilderness Wife” and “Two Ends to our Shoestring”.

The name Atikokan is believed to be derived from the Aboriginal language Ojibwa-Chippewa meaning “caribou bones” or “caribou crossing”; the town site was once the wintering ground for herds of caribou – many of them died here. Numerous rock paintings and lake names attest to the First Nations legacy of the Atikokan-Quetico area, an area blessed by Queticom, the Ojibwa Spirit of Unusual Beauty.

In 1688 Jacques de Noyon became the first European to travel through the area. La Verendrye followed in 1731, opening the interior to fur traders from the east. In 1741, the French fur traders were well established in the area and competing with the Hudson’s Bay Company. In 1798 Roderick MacKenzie traced de Noyon’s journey to establish a trading route for the Northwest Company (formed in 1779 by independent traders). By 1821 declining fur catches caused the Northwest Company and the Hudson’s Bay Company to merge together.

Construction of the Dawson Trail: 1800 Onwards

Construction of the Dawson Trail began west of Atikokan in 1868 from Thunder Bay and was completed in 1874. Colonel Wolsely transported troops to Winnipeg over the partially finished route in 1870. The trail passes through the interior of what is presently Quetico Provincial Park. The same year, the first gold discovery was made by the Hudson’s Bay Company’s J. Baptist and M. Pichot. The discovery was made 70 km southwest of Atikokan at Jackfish Lake. Ojibwa Chief Blackstone halted an attempt to construct a mine site there in 1872. The Chief acted as the Ojibwa spokesperson in the signing of the Northwest Angle Treaty, giving the land to the Dominion of Canada. Reserves were created with Treaty 3 covering the Atikokan area. Mining exploration began and sites were established. 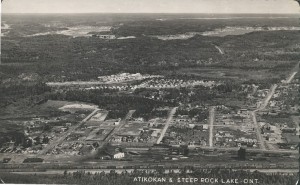 In 1882 the use of the Dawson Trail ceased with the completion of the Canadian Pacific Railway, which passed north of Atikokan. The Atikokan Mines were discovered east of Sapawe Lake by McKellers. There were also several other gold copper and iron finds.

Sawmills were established in the Jackfish Lake, Eye Lake and Companion Lake area in 1883. These sawmills were to provide timber for developing mine sites in the the Huronion, Big Six, Hammond Reef and Sawbill Mines area.

Upon hearing of the railway, pioneers Tom and Mary Rawn canoed to Atikokan from Mine Centre (a distance of about 80 kilometres) to become the town’s first non-aboriginal settlers. They opened the Pioneer Hotel in 1900 and, next to it, a general store was opened by the Snelgrove brothers of Fort William (now Thunder Bay). In 1902 Atikokan’s first post office was opened in the general store. Frank Scheider took over the post office and general store in 1904. A sawmill was erected about 3 km west of Atikokan at Milk Bay by J. D. McArthur in 1906. Two years later in 1908, Jimmy McQuat started building a log castle on White Otter Lake and completed it in 1918.  The castle included a 12.25 metre tower and was made completely from large red pines which he harvested himself – it is now a monument and a testament to both the spirit and determination of the Atikokan people.

In 1909 the Quetico Forest reserve was set aside to protect the red and white pines and a declining moose population as a result of hunting to feed the local logging and mining camps. This eventually became Quetico Provincial Park in 1912. In 1912 the Shevlin-Clarke Company began their operations in the Flanders area. Between 1920 and 1936 the company operated up to 11 camps in the northwestern section of Quetico Park.

A storekeeper named Mr. W. Palmer brought the first car to Atikokan in 1921. On August 4, 1935 the Pioneer Hotel burnt down, it was later replaced on the same site by the Atikokan Hotel which still stands today.

Julian Cross, a mining professor and prospector, began drilling of Steep Rock Lake in 1937.  Cross was looking for an iron-ore body. Two years later he joined the financier Cyrus Eaton and together they formed the Steep Rock Iron Mines Ltd. which would be Atikokan’s major industry for the next 40 years.

A small hospital was erected in 1940 at the Steep Rock Iron Mines Ltd. site approximately 14.5 km from Atikokan. Prior to that, the hospital facilities were limited to a small Red Cross outpost that operated out of a train car.

In 1942 Ontario Minnesota Pulp and Paper Company commenced logging north of Calm Lake with annual river drives to Fort Frances. This continued until 1972. J. A. Mathieu set up a camp and portable sawmill in 1943 where the present Spoon Lake crosses the Atikokan River. The same year a massive engineering project to drain Steep Rock Lake began. Dams were constructed and the diversion of the Seine River was completed. Millions of gallons of water were pumped out of the lake. Electric dredges removed silt year-round to expose the ore body. In 1944 the first ore was sighted and in the months that followed large quantities of ore was removed and the first train load was shipped on October 31. The company stopped production in 1979.

In 1945 Tom Rawn set out for Sapawe to do some prospecting – he never returned and was never found. To this day, his disappearance remains one of the community’s greatest mysteries.

In 1949 the first telephone exchange (the Northern Telephone) was established. Also, in 1950 an eleven bed hospital opened on Hematite Avenue, which has since been repurposed and expanded to a long-term women’s shelter. That same year the Atikokan Progress, the community’s newspaper was established and the town recorded its worst flood to date.

1952 saw the first library which operated out of a local store. On November 17, a new library building was opened across from where the Night Club now stands. The same year the Gorrie Street Post Office was constructed.

1953 was a big year with Atikokan going to dial phones and the Caland Ore Company, a subsidiary of Inland Steel Company of Chicago, signing a lease with Steep Rock Iron Mines Ltd. to develop and mine the Falls Bay or body of Steep Rock Lake. Pumping of this portion proceeded from 1955 to 1960 with the first ore being shipped by Caland in 1960. The first half of Highway 11 from Atikokan to Thunder Bay was opened in 1954 and John Reid became Atikokan’s first Reeve. A year later, the Royal Bank opened its doors.

In 1965 the Outers program was established at the Atikokan High School. Over the past 50 years, Outers has become a right of passage for the students and has been recognized by the world.

J. A. Mathieu Ltd. was incorporated in 1958 and took over the defunct Sapawe Mill. In 1963 Mathieu’s new plant was destroyed by a fire, causing the company to go into receivership with Domtar assuming management in 1971. Today the site is owned by Resolute Forest Products, who operate one of the country’s newest and most advanced sawmills.

The Atikokan volunteer firefighters had their busiest day yet on May 29, 1971. Early in the day, the pellet plant at Steep Rock Iron Mines caught fire. High winds made it difficult to put the fire out. As the fire crew were heading back to the Fire Hall, they received another call and headed to Pulp and Paper Co. Ltd. (now Rentech) where flames consumed the building causing $100,000 of damage. The secondary fire truck was called out to the tennis court as the change shack had also caught on fire. The firefighters had yet another call when a grass fire was reported on Vincienne St.

Pluswood Manufacturing, later named Proboard and then Fibratech began operations in 1975 producing particle board. A year later, on February 1, a new hospital was officially opened. During the early 2010s, the then-shuttered plant was purchased and eventually repurposed to manufacture wood pellets, where it was purchased by US-owned Rentech Fuels. After approval in 1977, Ontario Hydro began site clearing for a coal fired generating station, the first ever designed to use low sulfur Saskatchewan coal. Only unit 1 (200 megawatts) of the station was ever completed and ready for operations in 1985. After a controversial decision to remove the burning of coal from all of Ontario’s generating stations led to an incredibly uncertain future about the station and its workforce, in 2014 Atikokan proudly broke ground on its multi-million dollar, newly renovated OPG station, the first 100% biomass burning generating station in North America.

In 1981, the Tourist Information Bureau was constructed and in 1982 Atikokan adopted ‘Canoeing Capital of Canada’ as its official theme. The Atikokan General Hospital had a helipad constructed in 1983 and the Extended Care Wing constructed in 1986; as of 2016 the hospital is working its way through its first major expansion in 30 years, and is slated to be completed in 2017. Grayson Hall was added to the Atikokan High School and the Caland Ore property was purchased by the township from Steep Rock for one dollar in 1984.

1989 was an advancing year in communications. Nine channels were added to the basic cable offerings. Also, on February 26 Atikokan piloted a community broadcast which would run on a trial basis for two years. The broadcast covered everything from music and sports to weather and practical jokes (i.e. the pretend purchase of the Minnesota NHL hockey team).

In 1992 the Atikokan General Hospital’s Ambulance Base was formed. In 1995 the Atikokan Children’s Entertainment Series was created and in 1998 the now-defunct Friendship Theatre reopened its doors.

Since that time, Atikokan has seen its ups and downs but continues to work towards a better future.

Area Maps About Us From the Blog