From November 6 to December 11, Anne Gomes Siciliano of Dryden will be featuring an exhibit on which she has worked for about five years. She is dedicating this show in honor of her mother, Aldo Gomes. The title is a quote from her mother.
A self-taught artist, Anne grew up in Northwestern Ontario. She is a teacher of art and loves mixed media as a visual art form: collage, acrylic and watercolor.
Modern mixed media comes with a marvelous history begun in the early twentieth century. It is an art form that is novel and courageous, fostering leaps into the unknown. Anne has been inspired into this world and has produced a wealth of mixed media art in differing palettes of color. In addition, she has given workshops in Atikokan and has previously exhibited at the gallery twice.
This current exhibit is a series of portraits. Anne shares that she is intrigued with people and states, “You can often tell the life history of a person while looking into their eyes. My mom would often say, ‘I can see it in your eyes.’”
Over the course of 4 to 5 years, Anne added one portrait at a time to her collection and shares, “I’ve been fortunate enough to have personally met most of these people.”
The Atikokan Pictograph Gallery will be open for its next exhibit this Saturday, November 6. We are located in the lower level of Voyageur Mall and open weekly from Tuesday to Saturday noon to three. 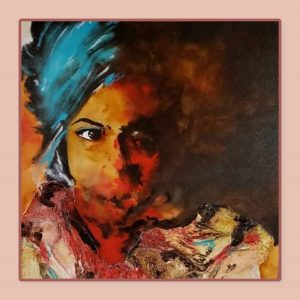